What is centralized transport?

If you already have heavily invested in your on-premise mail gateways and other infrastructure and you plan on moving to Office 365, Exchange Hybrid is the way to go in a long haul. When you have Exchange 2016 configured for Hybrid Setup with Office this where it come.

So Why Centralized Transport?

It all depends on your business requirements, and if you don’t then you are good with regular setup routing via Office 365 , let’s cloud manage it for you. IF YOU DO HAVE such as regulatory and compliance requirements and even for other purpose where you want you emails MUST  route through your on-premises infrastructure then you need to configure it this way. In this video I will walk you over how does it really work. 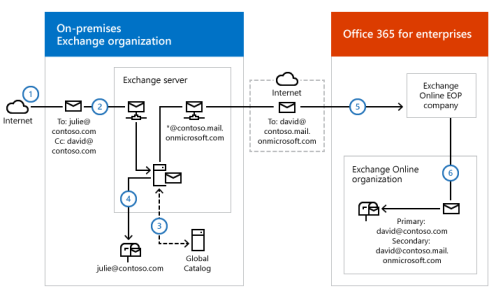 Do not install .NET 4.6.1 directly on your existing CU, first you need to upgrade to CU13 for Exchange 2013 and CU2 for Exchange 2016, this is the recommendation as per #msexchange team.

The issue reported in KB3161916 has been resolved.

To prevent any installation issue –
make sure that Windows PowerShell Script Execution Policy is set to “Unrestricted” on the server being upgraded to.

The New-ExchangeCertificate cmdlet has been updated to produce a SHA-2 certificate for all self-signed certificates created by Exchange. Customers may opt to replace existing non-SHA2 certificates generated by previous releases as they see fit.

“Proof of domain ownership has failed” Exchange Hybrid Configuration Wizard Failure –  if you are seeing this error even after your DOMAIN VERIFICATION / OWNERSHIP Status is OK in #Office365 you may need to do some extra effort. There are many articles related for the same problem but they all have different or similar scenario but not exactly. So I cam across a TechNet article the other day (I’ve followed many other blogs too) and there one simple step you need to make sure you copy the current TEXT for the Domain Proof.

at the Exchange Shell run this

copy all the proof text  ending with ==